My day job as a mechanical engineer designing emission legal engine packages for industrial applications makes me very curious to the emissions output of my LS1 engine at home. I’ve tested my 383 LS1 to ensure the new low overlap camshaft and catalytic converters are doing their jobs. Note that my engine has not been tuned since switching camshafts and adding catalytic converters. It has no problem going closed loop and the O2 sensors are switching. As a comparison I have also tested my 2013 Subaru Impreza WRX. I’ve really only been able to test them at Idle, but under load while driving they should be just as good if not better due to higher catalyst temperatures. 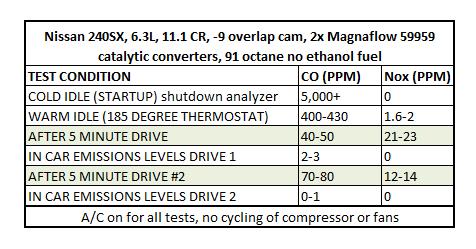 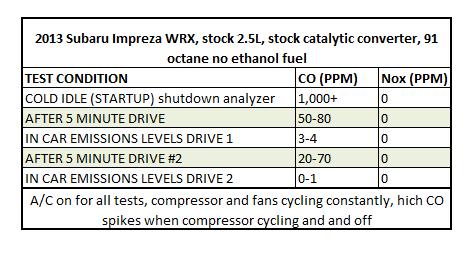 I tested both cars after just starting them up, knowing very well the emissions would be terrible. I expected high CO levels as the reactions in the catalytic converters would not be working and both engines will be running rich on start up. And that was the case. Both engines shut down the emissions analyzer. The Nissan jumped up to the 5,000 ppm range before I pulled the analyzer out. I pulled the emissions analyzer out when the Subaru hit 1,000 ppm. I expect the Subaru would have jumped nearly as high as the Nissan.

The results are actually a bit better than I expected for the LS1. It’s clear that it needs tuning as the emissions are very bad during transient conditions or if it hits the open loop map. The CO would spike extremely high in those conditions indicating a rich condition. The strangest results were with the Subaru at idle. It could be very good and keep CO levels at a constant 20 for a minute or so, and then out of nowhere would spike up in the hundreds. It also saw a good bit of CO spike when the fans and A/C compressor would kick on and off. My LS1, with it’s variable stroke compressor, never really cycles and the fans both stay on with the A/C on. The very low NOx levels of the Subaru would indicate to me that it has much cooler combustion temps, a different wash on the catalyst, or it’s emission strategy doesn’t switch as far lean as the LS1. But without better equipment there is no way to know.

I’ve also tested the in-car emissions levels. My old headers leaked right at the head and exhaust came right in the car. I wanted to make sure everything was sealed up this time. I tested the Nissan with windows up, windows down, re-circulation both on and off. And it was right at 0 to 1 ppm CO, so it appears the Hooker Headers seal up perfectly. I also put the probe all around the engine bay and collectors and saw no increase in CO or NOx levels.

I’ll retest the LS1 after I have it tuned.

The buyer/reader assumes all risk of products listed and modifications documented on this site, and agrees to hold the seller/author harmless for any injury, loss or damage. It is suggested that state and federal regulations be checked. Should any product prove defective after purchase, the seller liability shall be limited to refunding the original cost of the product.